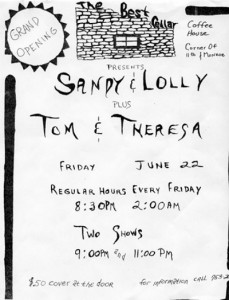 The Best Cellar celebrated its anniversary 40 years to the day after it started on June 22, 1973. Larry Edgar provided the sound reinforcement as he has done for almost every Best Cellar since he helped create it, and there were performances by several groups and individuals who have been active with the program over the years.