Watch this page for updates and registration information 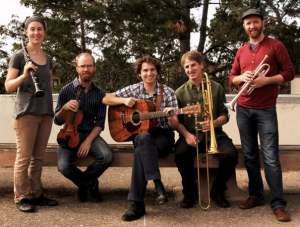 Nils Fredland has been calling dances with admirable skill and infectious energy since 2000. Respected for his expertise as a teacher and caller, sensitive leadership, and generosity, Nils is one of the busiest and most sought-after callers in the business. He draws on a large and varied repertoire of dances, presenting material from centuries-old “chestnuts” to cutting-edge contemporary choreography.

Nils is also known for breathing new life into traditional singing squares, and he has co-authored two books on the topic with master callers. Nils studied classical trombone at Indiana University, and has played his horn in ensembles ranging from symphony orchestras to ska bands. In Elixir Nils brings together his myriad talents in one thrilling package. Nils also works as the American Dance Publications Coordinator at the Country Dance and Song Society.

A fixture in the Los Angeles contra dance community since 2010, Jacqui currently calls at contra dances around the nation and in her home community of Los Angeles, CA. Jacqui produced and organized the 3rd Saturday contra dance series held at the Woman’s Club of South Pasadena, CA, from 2014 to 2016.