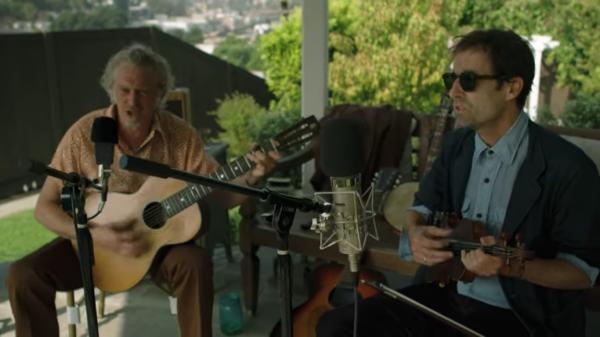 Oregon State University presents Andrew Bird and Jimbo Mathus on the next installment of the College of Liberal Arts’ American Strings series on Tuesday, May 12 at 5 p.m.

The webcast event is hosted by OSU Director of Popular Music and Performing Arts Bob Santelli. Each segment of American Strings is comprised of a conversation and music by successful artists from a variety of genres, making for a one of a kind opportunity to appreciate and know better the great American music tradition.

Andrew Bird is an internationally acclaimed musician, songwriter and composer who has released sixteen records. He has performed around the world at festivals and at renowned venues including Carnegie Hall, Sydney Opera House and Walt Disney Concert Hall. A TED Talks presenter, a New Yorker Festival guest, and an op-ed contributor for the New York Times, Bird also made his professional acting debut in the cast of Fargo’s fourth installment, which premiered on FX in the fall of 2020. Bird’s 2019 album, My Finest Work Yet, was nominated for Best Folk Album at the 62nd Annual Grammy Awards.

Jimbo Mathus is an American singer-songwriter and guitarist, best known for his work with the gold and platinum-certified swing revival band, Squirrel Nut Zippers. The group toured extensively throughout the 1990s, including performances for the 1996 Summer Olympics, The Tonight Show, Late Night with David Letterman, Dick Clark’s New Year’s Rockin’ Eve and more. Since the early 2000’s, Mathus’ career has included work for Buddy Guy and Elvis Costello, and a vast collection of solo projects that have led to his music being heard on Shameless, Ray Donovan and more.

In many ways, Mathus and Bird are the yin and yang of contemporary roots music. Mathus hails from Mississippi and Bird grew up in Chicago. Mathus was self-schooled by an inquisitive nature and being around other musicians. Bird formally studied music at Northwestern University. Music brought them together 25 years ago, and an equal devotion to their craft and mutual respect for each other as musicians has nourished their long friendship, resulting in numerous collaborations. Now, after a near 20-year hiatus from working together, the Mathus and Bird duo have been at it again with the March release of a new album, “These 13.”

Written and produced from 2018 through 2020, These 13 captures “the warm first-take feel of two old friends having a fine old time” (MOJO). Mathus and Bird co-wrote every song through an exchange of voice memos, verses and ideas. Working with producer Mike Viola they recorded the LP live to tape, playing and singing from opposite sides of a single microphone.

Join us for a live, intimate conversation where Santelli talks to the duo about their friendship, the fun they had together in the making of this album, and the poignant story behind its opening track, “Poor Lost Souls.” Bird and Mathus will also share some of their music in a pre-recorded video they made just for American Strings.

Free and open to all. Register for link to view on Zoom