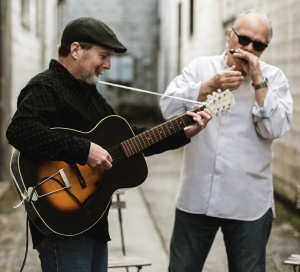 Oregon State University presents Curtis Salgado on the next installment of the College of Liberal Arts’ American Strings series.

Get to know better the Pacific Northwest’s own blues legend, Curtis Salgado, and guitarist Alan Hagar, in an evening of conversation and live performance.

“Curtis Salgado’s range and power as a vocalist are a tour-de-force…hard-nosed blues, beautifully nuanced R&B, phat and funky.” –Billboard

Salgado is famous, not only for his powerhouse live shows and multiple albums, but also for his passionate and insightful original songs. He is a three-time Blues Music Award nominee for Song of the Year, winning in 2018 for “Walk A Mile In My Blues” from The Beautiful Lowdown album. In total, Salgado has won nine Blues Music Awards, including the B.B. King Entertainer of the Year.

Now, after more than 40 years of recording, Rock Historian/Director of Popular Music and Performing Arts Bob Santelli will sit down with Salgado and Hagar and talk about their careers, Salgado’s music, their creative process. The interview will be followed by a live performance. The event is part of the College of Liberal Arts American Strings series.

Each segment of American Strings is comprised of a conversation and live, intimate performance by successful artists from a variety of genres, making for a one of a kind opportunity to appreciate and know better the great American music tradition.

Seating on the plaza is free and on a first come basis. The SEC Plaza is located between the Memorial Union and the Student Experience Center on Jefferson Street. Parking in permit restricted lots is unrestricted after 5 p.m.