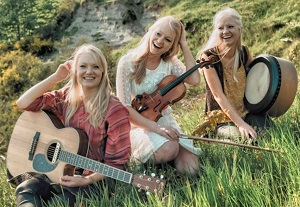 The Gothard Sisters are a dynamic group of three sisters, whose impressive array of talents have set them apart as one of the most refreshing and compelling acts in Celtic music today.

The sisters’ unpredictable and theatrical flair brings a youthful splash to the time-honored tradition of Celtic folk music, bridging the gap between modern Pop and Folk-Rock with a sunny, optimistic style that has been described as “beautifully-arranged, melodic-minded Celtic Folk-Pop.”

Hitting the streets of their hometown – Edmonds, Washington – in 2006, The Gothard Sisters first began playing together as a violin trio busking for tips at the local farmer’s market, working their way onto stages at local fairs and festivals. Audiences responded with enthusiasm, and over 1,000 performances later the band recently performed at the Millennium Stage at the Kennedy Center in Washington D.C., completed several national concert tours of the United States, regularly perform as guest entertainers on Disney Cruise Line in Europe and South America and are well-known musicians on the national Celtic festival circuit.