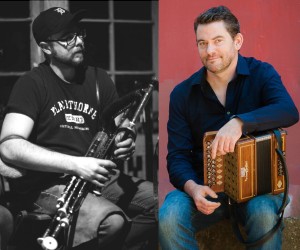 Seán Gavin, is one of the most highly regarded Irish musicians of his generation. Master uilleann piper and flute player, he is the first and only musician born outside Ireland to win the prestigious Seán Ó Riada Gold Medal. His most recent recording, Music from the Lost Continent, with fiddler Jesse Smith, accompanist John Blake, and bodhran player Johnny “Ringo” McDonagh, was hailed by The Irish Echo as “traditional music at its best!”

He tours regularly with Téada, as well as solo and other projects. Seán was the Musical Director for the PBS program “I Am Ireland”, and for the long-running Atlantic Steps. He has lectured on traditional music at the University of Chicago, St. Andrew’s in Scotland, and many other locations. He is now back in his native Detroit where he continues to play, teach, and promote traditional Irish music. www.SeanGavinMusic.com

Johnny B Connolly is a Dublin-born accordionist whose exquisite playing has become a byword in traditional circles. After signing with Green Linnet Records, Bridgetown was released to universally glowing reviews. “A joy from beginning to end…Connolly’s playing is skillful and exciting,” All Music Guide. “Connolly is clearly a master of the box accordion’s many possibilities.” Bill Compton, Sacramento News & Review

Johnny has taken the rich fluid sound of his box playing around the world with other great artists including Solas, Kevin Burke, Nuala Kennedy, Ged Foley, Tony Furtado, Aidan Brennan, and Casey Neill. He has appeared at many festivals including the Dublin Ohio Irish Festival, North Texas Irish Festival, Austin Celtic Festival and ICONS Festival in Boston.

Friends of many years, Seán and Johnny have a special chemistry. A sure and certain mastery of their instruments, combined with a love of traditional music and wide knowledge of both tunes and players, makes this a very special duo. Prepare to be amazed!

Meet and socialize at 6 with the concert starting at 7