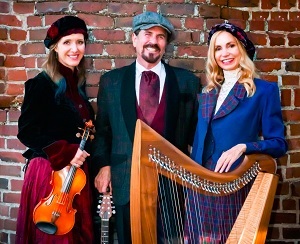 Golden Bough’s first European performances were in the streets and small folk clubs of Ireland, England, Scotland, Wales, Germany, Holland and Switzerland in the early `80’s. These simple beginnings soon led to major tours of European cities and a recording contract with a top European folk music label. Other activities that Golden Bough has been involved in over the past several years include peace marches in cities all over Europe protesting the war in Bosnia-Herzegovina, musical presentations for tens of thousands of elementary school children and events for human rights, religious freedom and drug rehabilitation.

Since their inception, Golden Bough has become a popular and in demand group on both sides of the Atlantic, gaining critical acclaim and enthusiastic support from folk fans wherever they perform. Blending their voices in pristine harmony, they back themselves on an array of rare and more common acoustic instruments, including; Celtic harp, penny-whistle, violin, octave-mandolin, mandolin, accordion, guitar, harmonica, recorder and bodhran. In the recording studio, as well as on stage, Golden Bough captures the essence and joy of traditional folk music and captivates listeners with the uniqueness of their original compositions. With songs and instrumental pieces ranging from ballads to lively jigs, reels and sing-alongs, Golden Bough provides an atmosphere in which the listener can enjoy unique entertainment within and beyond the boundaries of traditional folk music.  Their music is well received and enjoyed by audiences of all ages.