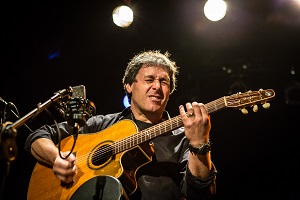 A young Sicilian artist left Italy over 30 years ago, with the dream of “playing with the greatest guitarists”. Peppino has achieved his dream and he’s now firmly planted in the “who’s who” of the guitar world.

Peppino D’Agostino emerged on the acoustic guitar scene in the early 80’s as a leading member of the second wave of the great fingerstylists that helped redefine the instrument in the ’90s. His remarkable technique, penchant for open tunings, and percussive effects are the basis of his unique compositional style which has been inspiring musicians and audiences alike for decades. Add to that his natural warmth, playfulness, and broad musical tastes and you have the recipe for what he calls “minestrone music”. His virtuosity and his emotional charge have also had a significant influence on the younger generation of fingerstyle guitarists. D’Agostino continues to evolve and grow in ways that would have been hard to predict when he first showcased his melodic yet emotionally intense style on the recordings Acoustic Spirit, Close to the Heart, and Every Step of the Way which was named one of the top three acoustic guitar albums of all time by Acoustic Guitar magazine readers.

A house concert is an excellent opportunity to hear great music in a very intimate setting.